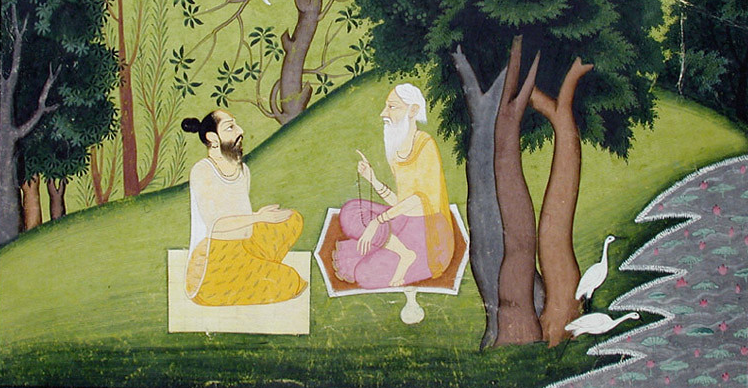 Narrator: Here is a conversation between a father Sage Uddalaka Aruni (उद्दालक अरुणी) and his son Shwetaketu (श्वेतकेतू). This dialogue appears in the Chhandogya Upanishad (छांदोग्य उपनिषद) of the Samaveda (सामवेद). It is a part of the Brahman Book (ब्राह्मण ग्रंथ) called Chhandogya Brahman (छांदोग्य ब्राह्मण). Like other Upanishads, Chhandogya too was compiled long before the time of Gautam Buddha. Behold! The students are singing this Upanishada’s Shanti Mantra (शांतीमंत्र) –

Shwetaketu: At the age of 12, I was sent to the hermitage to learn the Veda and the Vedanga. In 12 years, I mastered the 4 Vedas and the sciences of phonetics, etymology, grammar and astronomy as well. I also completed the studies of the Shastras. And by the way, I might as well mention that I was the brightest student at the hermitage.

Narrator: Shwetaketu knew he was a brilliant student. And soon after returning home from his studies, he developed a great sense of pride and arrogance which became evident from his manners. The father was worried by his behavior. So he decides to do something about it. He summons Shwetaketu.

Aruni: Shwetaketu, my learned boy, did you learn from your Guru about the ultimate knowledge, by which everything becomes known?

Shwetaketu: No Father! I don’t think my Guru knew about such a thing. Otherwise he would have taught me.

Aruni: Dear Son, did you ask him for this knowledge?

Shwetaketu: Does such a knowledge exist?

Shwetaketu: I must admit that I never asked my Guru to teach me about it. Please do tell me about this knowledge by which everything else becomes known.

Aruni: Shwetaketu, it is knowledge of the Brahma! The ultimate truth! It is from the Brahma that this whole world came into being. Thus by knowing it, everything else comes to be known.

Shwetaketu: How can the world that is made up of so many different things, come from one Brahma?

Shwetaketu: Father, this is something that I did not learn at the hermitage. Please tell me more about the Brahma.

Shwetaketu: Father, I do not understand how from one microscopic (सूक्ष्म) Brahma the entire world is created. Please explain to me this again.

Aruni: Well then! Go, bring me one fruit of that Banyan tree.

Shwetaketu: Here it is father.

Aruni: What do you see in it?

Shwetaketu: I see very tiny seeds in it.

Aruni: Well then break open one seed. What do you see?

Shwetaketu: I see nothing at all inside it.

Shwetaketu: How is it that this Atma is present everywhere, but it cannot be seen?

Aruni: Bring me a glass of water and few crystals of salt.

Shwetaketu: Here it is.

Aruni: Put those crystals in the glass of water.

Aruni: Now tell the taste the water from the left edge of the glass.

Shwetaketu: It is salty, Sir!

Aruni: Now tell the taste the water from the right edge of the glass.

Shwetaketu: It is salty, Sir!

Aruni: Now tell the taste the water that is at the bottom of the glass.

Shwetaketu: This too is salty to taste, Sir!

Aruni: The salt is present everywhere but it cannot be seen. To find it, one has to examine the water, taste it. Similarly to realize the Atma that resides in everything one has to carry out an examination.

Aruni: The Brahma is beyond all names and forms. No form or name can describe it. Hence while describing the Brahma, the Vedas say “न इति, न इति”, its neither likes, nor like that! Just as by knowing clay, the material cause, all kinds of pots and pans can be understood. By knowing the Brahma, all of is forms can be known. The Brahma is primary, and everything else is secondary.

Chorus:
|| ब्रह्म सत्यं, जगत् मिथ्या ||
The Brahma is the ultimate truth.
The Jagat that is created from it is an illusion.

Aruni: Dear child, all the rivers flow into the ocean and become a part of it. The rivers lose their names and forms once they have emptied into the ocean. Similarly, once a being merges with the Brahma, they lose their name and form, to become the Brahma. Then there is no coming back. Shwetaketu, know that the name and form are not permanant, but the Atma is. The Atma is immortal. And that immortal being is you Shwetaketu!

Shwetaketu: Father, now I understand. Every Being comes from the Brahma. Every being acquires a name and a form. And after giving up name and form every being merges into Brahma. But, how does one find the Bramha?

Aruni: Son, Say a person is left in an unknown place, far away from his home. What will he do? He will inquire about how to reach his city. Right? He will then follow the instructions to reach home. Similarly a person can know how to reach the Brahma from a Guru. A Brahmanishtha and Shrotriya Guru will guide you Shwetaketu.

Narrator: Thus the father explained the Brahma, and the son learnt humility too! Like all the Upanishadas, this one too is in the form of dialogue. Question and Answer. Student asks a question, and the Guru gives an answer or directs the student to find the answer. It reminds one of the Socratic method of learning. We end this retelling of the Upanishad, by reciting its Shantipath शांतीपाठ. Let us all say it together!