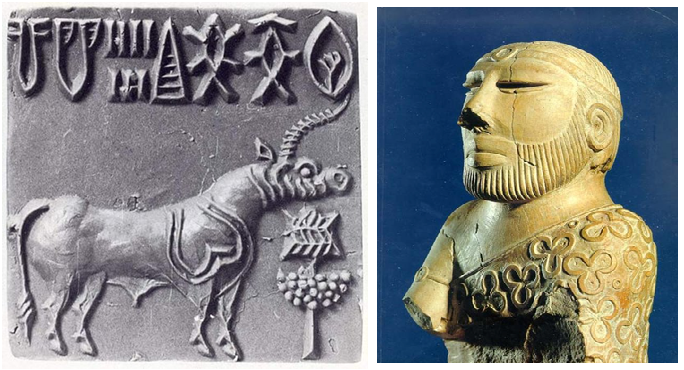 Charles Masson, a British East India Company soldier, arrived at Hari-pah sometime in 1826. It was a place near Lahore with abundant grass and was surrounded by numerous Pipal trees. There he found a huge ruined brick castle and a circular mound. He was mesmerised by the ancient structures, and made sketches of the high castle. The sketches are now lost and so is the castle. These were the ruins of the ancient city we now call Harappa.

The destruction of ancient ruins started during construction of the Karachi – Lahore railway line. First the bricks from the abandoned city of Brahminabad were used for the rail track. In this process the ancient city of Sindh was reduced to rubble. Further north, near Lahore, they found another hoard of bricks, this was the ancient city of Harappa. The bricks from its structures were used to lay down a 150 km rail track. This was in the year 1857.

In 1872, Sir Alexander Cunningham excavated the site. He found a Unicorn seal with a script that was neither Brahmi nor Kharoshti. This gave rise to the possibility of a literate civilization having lived in India before the Mauryan times. But he speculated it to be of a foreign origin.

It was not until 1921, that the Harappa got the attention it deserved. The city was excavated by Rai Bahadur Daya Ram Sahni. Soon in 1922 the ruins at Mohenjo-Daro were discovered. Mohenjo-Daro meant the Mound of Mohan. (It’s post-independence spelling Moenjo-Daro means Mound of Dead.) Soon excavations were carried out at Mohenjo-daro too. These cities brought to light a civilization that existed in India a couple of thousand years before the Greek civilization.

Long before the Indus Valley excavations, the British archaeologists were carrying out excavations at the ancient sites in Egypt and Mesopotamia. The exciting discoveries of 1922 from these areas were – The discovery of the tomb of Tutankhamun, by British archaeologist Howard Carter. The discovery of intact tomb received worldwide press coverage. The pyramids, tombs and the treasures of the Pharaohs have been more attractive than the mundane underground drainage system or the water management system of the Indus Valley Civilization (IVC). The other discovery of 1922 was the remains of two four-wheeled wagons at Ur (Mesopotamia). It credited the Mesopotamians with the invention of wheel. This excavation was also carried out by a British archaeologist Sir Leonard Woolley. Based on the findings in these ancient foreign cities, the findings of IVC were interpreted, sometimes incorrectly.

For example, the Sumerian Kings and the Royal family lived in a fortified Acropolis. They had a belief that the King was the administrator of God’s territory. Thus Sumerian town had gated acropolis, separate from the rest of the city. The acropolis consisted of palace, temples and other royal structures. This foreign concept of Acropolis was superimposed upon the sectored cities of IVC. The sectors in the cities were labelled ‘Citadel’ and ‘Lower Town’, which might or might not have been so. Same can be said of the small statute that was named ‘Priest King’. There is no evidence of palace, temples, kings or priests in the IVC. Yet the misleading name has stuck and some have used the image as a representative of IVC ‘Priest Class’.

The IVC was concluded to have had origins in Mesopotamia. It was thought that IVC was a result of colonization of then India by the people of West. In the early years it was declared that IVC had foreign origin. Archaeologists like M. Rafique Mughal and Amalanand Ghosh studied earlier settlements and showed the gradual development of the rural culture into the urban civilization. In 1970’s it was proved that the Pre-Harappan sites were actually Early-Harappan. This proved that the IVC was an indigenous civilization built by the people of India.

When it came to solving the mystery of the abandonment of IVC cities and towns, again a ‘foreign’ element was added to the picture. Based on few scattered skeletons found in Mohenjo Daro, Sir Mortimer Wheeler declared that the inhabitants were massacred, by invading Aryan tribes. These Aryan tribes, he said, were headed by the RigVedic Indra who destroyed the cities of IVC. This ‘Aryan Invaders’ drove out the IVC dwellers who fled to the South. Thereby creating a Northern Aryan and Southern Dravidian divide among Indians. The invasion and massacre theory needed a lot more than few skeletons like burned fortresses, arrowheads, weapons, pieces of armor, smashed chariots for evidence. But despite extensive excavations at Mohenjo Daro, none were ever found. In 1980s biological anthropologist K A R Kennedy, studied the skeletal remains. He found no marks of weapons or violence upon them. It was also found that those people had died at various times separated by as far as 1,000 years. Since the deaths had not occurred at the same time, the single event of ‘massacre by foreigners’ theory fell apart.

In the meantime, Max Muller, who was studying the Vedas and Upanishads, had arbitrarily assigned 200 years to five layers of four Vedas and Upanishads. Each layer he said was composed in 200 year periods before the Buddha by 6th century BCE. There are more changes in the language of the scriptures to have occurred within 200 years, but the Vedic literature had to be shown later than IVC so that it could be attributed to the Invading Aryans. Thus the date of RigVeda was set to 1200 BCE and theory was put forth that the foreign Aryans had brought with them their god Indra and the Sanskrit language. By 1990’s the geological studies had shown that the river Sarasvati had dried up before 1900 BCE. This challenged the date of 1200 BCE for RigVeda as verses of RigVeda glorifed the flowing waters of Sarasvati.

Another story of IVC was that of the foreign origin of the horse. It was claimed that the people of IVC did not know of the horse. The horse was not represented in the art, and as yet horse remains were not found. It was believed that the invading Aryans had introduced horse to India. Contrary to this, horse heads as game pieces and toy horses were found in IVC. In 1974, J. P. Joshi and A. K. Sharma identified Horse bones in Surkotada, an IVC site dating to 2100 – 1700 BCE. Thus before the arrival of the Aryans (on their horses) horse was already present in Surkotada. But it was only after 20 years, when S. Bokonyi, a Hungarian archaeologist verified the claim that the Indian community accepted horse as a part of IVC.

Archaeologists have ignored any co-relation of the artefacts to Vedic and Puranic literature. Thus the literature of Vedic Culture and the archaeological findings from the Indus Civilization remained separate. In 1970s Dr. S. R. Rao discovered and excavated the submerged city of Dwaraka. He was asked if he was sure that it was Krishna’s Dwaraka of the Mahabharata. To which he had famously replied, “Only the name board is missing!”

Historians like B. B. Lal have studied the culture of IVC and shown its continuity into India of today. The unbroken continuity in art, craft, clothing, transport etc. challenged the foreign element story. An invasion (or migration) would have shown a break or change in the culture.

Now science is trying to tell the story of IVC through Genetics. On 5th Sep, two related papers were published. Both used same data and shared a number of same researchers. Yet, their conclusions are far different.

The papers are based on the genome of one individual of Rakhigarhi (a female) and 11 Rakhigarhi like individuals found in East Iran and Central Asia. These 11 samples being genetically different from the Central Asian samples were assumed to be migrants from IVC to Central Asia.

V. Narasimhan’s paper summarizes his findings as – “Earlier work recorded massive population movement from the Eurasian Steppe into Europe early in the third millennium BCE, likely spreading Indo-European languages. We reveal a parallel series of events leading to the spread of Steppe ancestry to South Asia, thereby documenting movements of people that were likely conduits for the spread of Indo-European languages.” This paper supports the Aryan Migration theory, but at the same time also states that proportion of Steppe pastoralist – related ancestry in South Asia is much smaller compared with Europe. David Reich, one of the authors agrees that the single largest genetic contributor to people living in South Asia today is from IVC.

The paper published by Dr. Vasant Shinde, suggests that the gene flow was from South Asia to Steppes. It states that the Rakhigarhi genome was from a population that is the largest source of ancestry of South Asians. The Rakhigarhi genome does not have Steppe Pastoralist / Iranian Farmers / Anatolian Farmers ancestry. Thus confirming that farming in South Asia was local development and not a result of a large-scale migration from the West. Next, it states that the separation of South Asia and Iran happened before 12,000 years. And lastly, it also states that the Indo-European language found its route from Eastern Europe to South Asia from across Central Asia and not across Iran, as it was proposed earlier. This transmission, it says happened in first half of the 2nd millennium BCE. Dr. Shinde cautions that more samples are needed to further these studies, and this is only a beginning for ancient DNA study. There is yet much to be done to understand the migrations of ancient people and the spread of Indo-European languages.

Rakhigarhi in blue. Other IVC sites in red. Sites in black were in cultural contact with IVC. Gonur and Shahr-iSokhta in yellow, where genetically Rakhigarhi like 11 individuals were found. PC – Cell Paper.

One by one, bit by bit the castles of foreign origin of IVC and the foreign origin of Vedic Culture (VC) have fallen apart. The attempts to show the IVC and VC later and derived from the West have been falsified. The premise that the people of IVC were the Vedic people has received scientific evidence. Archaeology, geology, anthropology, linguistic studies and now genetics too reject it. Dr. Shinde’s paper shatters the foreign IVC theory, Dravidian IVC theory and the Aryan Invasion Theory. In today’s India these findings demolish the foundation of Aryan-Dravidian divide and the politics that has been played around it.

This is a complete turn of tides, not only is the Aryan Invasion disproved, but new studies suggest migrations from India into Central Asia. A study of the ancient cattle DNA has concluded migration of Zebu Bull from India to the Fertile Crescent. This movement from East to West, of humans along with cattle occurred in first half of second millennium. This study also points to a migration out of India.

Just as the Indian scriptures recorded vanishing of River Sarasvati and submerging of Dwaraka, they have also recorded the migrations of Anu, Turvasu, Amavasu tribes to the West. So far, the Sarasvati and Dwaraka story have been proved to be true. Maybe we were wrong to say that the sages wrote ‘Myths’ and not History. Maybe the records of the scriptures can help in tracing the ancient migrations. So far we have seen enough ‘foreign’ stories of India. What we now need is the ‘Inside’ story.